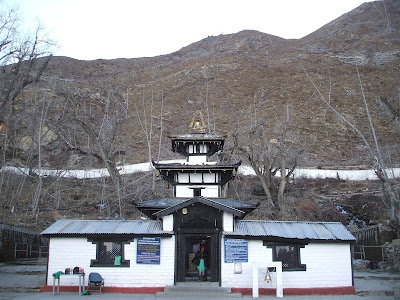 Muktinath is a religious place for Hindu and Buddhists which is located in the Mustang District at an altitude of 3,710 meters at the foot of the Thorong la pass which is part of the Himalayas on Mustang, Nepal. Muktinath Temple is close to the village of Ranipauwa.


Muktinath Temple is one of the more famous religious places for the Hindus. Muktinath Temple is one of the most ancient Hindu temples of God Vishnu. The murti is of gold and is tall enough to compare with a man. Within Hinduism, it is called Mukti Kshetra, which literally means the "place of liberation or moksh". This temple is considered to be 106th among the available 108 Divya Desam considered scared by origin in Thiru Saligramam. This houses the Saligram shila, considered to be naturally available from of Sriman Narayan- the Hindu Godhead. It is also one of the 108 Siddhpeeth & is named Mahadevi. The Buddhists call it Chumig Gyatsa, which in Tibetan means "Hundred waters". Although the temple has a Vaishnav origin, it is also revered in Buddhism because guru Padmasambhava meditated there for some time. For Tibetan Buddhists, Muktinath is a very important place of dakinis, goddesses known as Sky Dancers, and one of the 24 Tantric places. They understand the murti to be a manifestation of Avalokitesvara, who embodies the compassion of all Buddhas. For the Hindus, the importance of the shrine is a bit different. Hindu Vashanavites consider the Muktinath shrine to be one of the eight most sacred shrines on earth. There are 108 waterspouts in the backyard of this temple called as muktidhara where frozen water is continuously flowing from the bullhead and two Kunda(ponds) which is in front of the temple. Taking bath in these 108 waterspouts and two Kunda(ponds) believes to bring salvation. The desert beauty of Mustang will steal your heart, and it is mesmerizing. 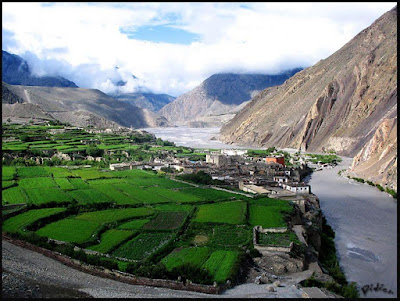